Best Book I Have Not Read

Writing, Reading, Teaching, Life, Attempting to Balance it All 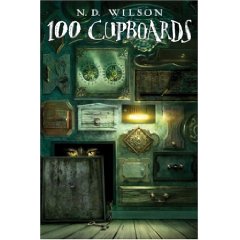 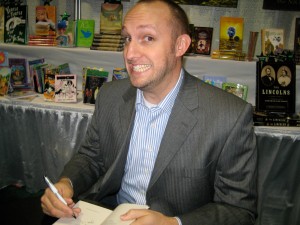 The funny guy in the photo is author  N.D. Wilson. I just finished listening to his 100 Cupboards in my car. It was one of those great audiobooks that make you want to hang out in your car or drive the long way home. The main character, Henry, has ended up living with his aunt, uncle, and 3 cousins in Henry, Kansas after his parents were kidnapped. You don’t learn much about those parents, except that they were wildly overprotective, and often not around to raise their only child (there was a nanny of course).

In Henry’s new bedroom, he soon becomes aware that there is a hidden door behind the plaster of the wall. Through a great deal of nighttime working and some help from his cousin Henrietta, Henry comes upon not just one cupboard, but 100 cupboards. One door allows a peek into what appears to be a mailroom with a postmaster walking back and forth putting mail into the boxes. Another allows wind and rain to blow through.

The cupboards in his room are also linked to a mysterious door that led to what was the family’s grandfather’s room. Since his death several years before, the family has been unable to open the door.  Henry and Henrietta find the secret to opening that door as well as traveling through to worlds on the other side of the cupboards.

While there are some creepy parts, the storyline is intriguing and I can hardly wait for Dandelion Fire, the second installment of the trilogy.

Random House has a clever little sneak peek of what might be found behind the doors.